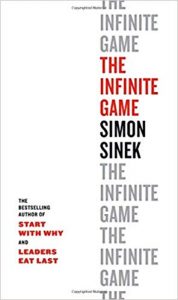 This month we summarize the 2019 book The Infinite Game by Simon Sinek. This is Sinek’s third book and follows the 2014 bestseller, Leaders Eat Last.

There are two kinds of games. Finite games have known players and fixed rules. As I write this sentence, I am watching the finite game of football. The game has two known teams pitted against one another with referees enforcing the rules. One team will win the game by having scored more points as the time expires.

Infinite games are played by known and unknown players. There are no agreed-upon rules, and no finish line or clock signaling the end of the contest. There is, therefore, no way to “win” an infinite game; the best you can do is keep playing.

Sinek notes that too many business leaders treat their company as though they are in a finite game and can “beat” the competition. Leaders can choose whether to play with a finite or infinite mindset. Leaders who choose to adopt an infinite mindset must follow five key practices: 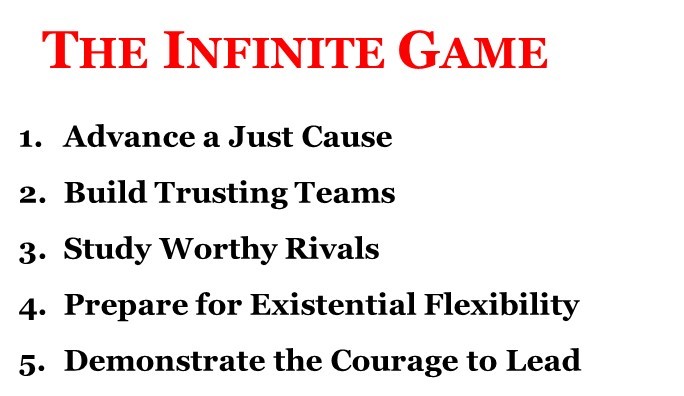 Advance a Just Cause

A Just Cause must be:

Leaders must write the Just Cause down and make it their “true north” on the compass. Being the best on the market, achieving growth, or being socially responsible is not a Just Cause.

Leaders in an infinite game realize that team culture stems from values and behavior. Sinek shares examples from the Navy SEALS, where teammates who were low-to-mid performers but trustworthy were judged superior to counterparts who were high performers but rated low on the trust scale. You can learn more about the SEALS leadership experience at our post Extreme Ownership.

Sinek shares several examples of what he terms “ethical fading” by companies including Wells Fargo and Facebook. You can learn more about the concept of trust at our post, the Speed of Trust.

A Worthy Rival is another player in the game who it will benefit you to study and learn from. They can be within your industry or outside it, the key is that they help us get better at what we do.

Lean East has several current clients who continually learn from larger companies in the same industry. Worthy Rivals serve geographically different markets and do not compete, making sharing systems, tools, strategies, and processes possible. These worthy rivals will often come up in conversation as a comparison, and it is common to hear the question, “How does company X deal with this issue?”

In The Infinite Game, Simon Sinek defines Existential Flexibility as “the capacity to initiate an extreme disruption to a business model or strategic course in order to more effectively advance a Just Cause.”

Infinite-minded leaders who see that their current path is restricting the team’s ability to achieve the Just Cause must adapt. They must flex even if it means abandoning or disrupting their existing business model.

Sinek notes several companies who lost sight of their Just Cause and didn’t adapt when they should have, including Eastman Kodak who elected to not pursue their own digital imaging technology. Sinek also shares the example of Walt Disney flexing and selling his stake in Walt Disney Productions (as the organization became too large and profit-focused) so he could pursue his dream of building Disneyland.

Demonstrate the Courage to Lead

Few of us have the courage to change from a finite mindset to a more infinite one. As Sinek searched for infinite leaders to study, he found not individuals, but partnerships and teams. Great people standing together with deep trust and a shared Just Cause.

Courageous leaders know that they don’t have all the answers and will never have total control. They are willing to do what is right, even when it is harder.

Let the power of purpose direct the courageous leader toward the right decisions. Do not focus on revenue for the current quarter or year, the earnings report, or the market share report. These are all finite results in an infinite game.

Be sure to check out our other summaries of Simon Sinek books:

Leave any comments below!