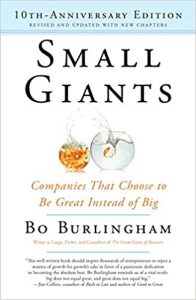 People who learn principles from the leaders and companies profiled in Jim Collin’s book Good to Great sometimes wonder if the lessons from large, publicly owned companies translate to their small businesses. For example, it may be hard to “fire bullets, then cannonballs” when you only have a three-person team!

Author Bo Burlingham wrote Small Giants: Companies That Choose to be Great Instead of Big as a study of smaller companies and their leaders. First, he interviewed many leaders from private businesses featured in his magazine over the years, and then he shared what makes them different – and better than – their peers. These entrepreneurs aren’t focused on the idea of an IPO or acquisition, but they are committed to building an exceptional business using other measures.

Author Bo Burlingham is the long-time Editor at large of Inc. magazine and a co-author of The Great Game of Business and Finish Big. Burlingham joined the Inc. magazine staff in 1983 and then spent many years working with Founder Bernard Goldhirsch to popularize entrepreneurship in America.

Like many of the “small giants” featured in the book, Bernie Goldhirsch didn’t intend to found a business publication. Bernie’s initial vision was a school ship that would sail the world, with the students on board documenting their experiences of growth and teamwork. These experiences were then published in Bernie’s new magazine Sail and became very popular. As his businesses grew, Bernie searched in vain for articles that would help him with growing and leading a successful small company. He decided to fill this void by founding Inc. magazine.

Burlingham found some key areas that the Small Giants in his study excelled at:

The founders and leaders of the Small Giants could resist the pressures and temptations to expand too quickly or in the wrong direction – or even at all. In short, they feared growth could result in a loss of control and compromise their values and excellence.

Growing a business rapidly often results in the need to take on outside investors, and a company driven not by your own aspirations but rather by the need to meet growth targets set by outsiders.

The Small Giants have exceptionally intimate relationships with customers and suppliers, based on personal contact and a mutual commitment to delivering on promises. They focus on customer value and the highest levels of customer service. “Great customer service involves demonstrating to customers that you value their business and will go the extra mile to keep it. Enlightened hospitality means showing them that you care about them personally.”

Being the best means focusing on what you do better than others. Sometimes this focus meant getting rid of the customers who you don’t quite fit into your lane. “Instead of trying to do it all, we wanted to be the best at a few things…that meant getting rid of customers including some who’d been with the company for a long time…”

Each company in the study had an extraordinarily intimate relationship with the local city, town, or county in which it did business – a relationship well beyond the usual concept of giving back. They purposefully redeveloped areas of the city or contributed to local charities and programs. Burlingham notes that unlike some of the socially responsible businesses of the 1990s (e.g., Ben and Jerry’s), the Small Giants chose not to market their charitable giving.

Small Giants prioritize intimate relationships with employees. Employees never doubt that the company, its leaders, and the other people they work with care about them personally. Similarly, they will stand by them through thick and thin as long as they hold up their end of the bargain.

It’s the managers and employees who do the work of the business day in and day out (not the leaders) who must convey the spirit of the company to the outside world. Accordingly, these employees must be the company’s first priority. Ironically, for all the extraordinary service and enlightened hospitality that the Small Giants offer, what really sets them apart is the belief that the customer comes second.

“Creating and nurturing a work environment that frees coworkers to grow and reach their full potential is the primary purpose of the company,” notes one Reell Precision Manufacturing document.

First, begin by making sure you have the right people on the bus, as Jim Collins put it in Good to Great. After that, keep them engaged as active participants in living the mission and vision. Many of the Small Giants learned there were limits to the number of employees they could have and still maintain those intimate, personal connections.

The leaders of these Small Giant companies constantly and consistently share their overarching mission; their Why. The mission is different for each organization, of course, but in all cases, it rises above and beyond profits. These profits are a way to fuel the mission, not the ultimate end objective.

Small Giants focus more on executing their purpose than on hitting a revenue or profit target. They focus on their relationships – with employees, customers, community, and suppliers. If these relationships are strong and each group is as passionate about the company as the founders and leaders, the financial results are likely to follow.

The founders and leaders of the Small Giants have a passion for what the company does. Above all, they personally care about the subject matter and are focused on keeping that passion alive throughout the company.

These leaders were not professional managers. Similarly, there was no “best practice” organizational structure used by the Small Giants; the various companies had a wide variety of corporate structures and modes of governance. They all succeeded by choosing structures of governance that fit their own culture.

Don’t get to this point thinking the results don’t matter. Every Small Giant survived or thrived only through achievement.

Jay Goltz of the Goltz Group shares, “In the course of being compassionate, you can’t relinquish your responsibility to be unmerciful when it’s necessary. You know, life is unfair but merciful. You can do everything right and get a brain tumor. Business is unmerciful but usually pretty fair. People who go broke often bring it on themselves. For a company to succeed, everybody has to do their bit, and you have to insist on it.”

“You should feel really worried if you’re not profitable,” says Goltz. “If you have an established company and you don’t have profits, you’re doing something wrong. There’s a hole somewhere. Profits are not optional in business, if you don’t have them, you’re dangerously close to going broke.” 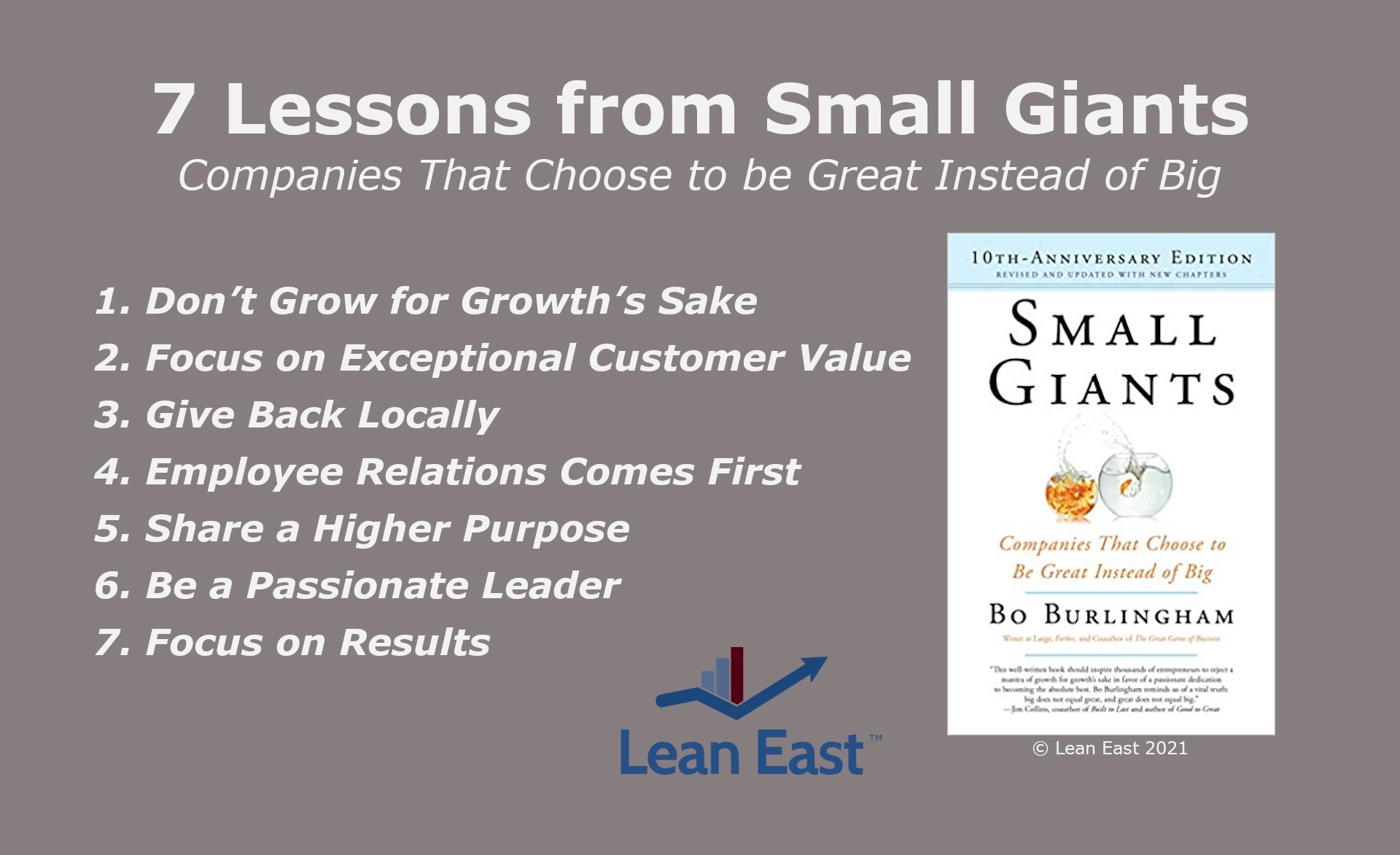 In conclusion, you can apply the lessons from these Small Giants above and create a business that allows you to live your passions alongside a small team of loyal employees. Connect with Lean East for introductions to some “Small Giants” we know or have supported in the New England region.

Here are some related posts that you may want to check out:

7 Lessons from Good to Great

Ten Lessons from Built to Last

The Business Case for Lean

Ideas for Action from The Culture Code